‘Copagator’ at the Balmoral Show 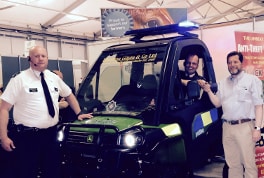 The four-track John Deere Gator utility vehicle was nicknamed the ‘Copagator’ after a Facebook campaign invited the public to come up with a special call sign for it during the build-up to the show.

Supplied by John Deere agricultural & turf dealer Johnston Gilpin & Co Ltd of Lisburn, who also exhibited at the event, the Gator was helping to promote the PSNI’s fight against rural and agricultural crime. Crime Prevention Officers (CPOs) were on hand throughout the show to provide guidance and advice to visitors on protecting farms, businesses, homes, property and equipment.

“Tackling crime against the rural community is important to the police,” said Supt Brian Kee. “We understand the effect these crimes have on these communities and the grave impact they can have on farmers’ livelihoods. Our strategy is to work with partner agencies and commercial stakeholders to identify ways of preventing crime, as well as targeting and arresting those committing such offences.

“We are particularly pleased to be working as part of the Rural Crime Partnership (RCP) to spread the message about crime prevention and reporting suspicious activity, and bring forward recommendations and initiatives to combat rural criminality.”

In addition to the PSNI, RCP members include representatives from the Department of Justice (DoJ), the Ulster Farmers’ Union (UFU), Department of Agriculture, Environment and Rural Affairs (DAERA), National Farmers Union (NFU), and the Young Farmers’ Clubs (YFC).

“The farming industry is a very important part of our community, and we want to reassure people that we are doing all we can to prevent thefts,” added Supt Kee. “Thefts of farm machinery or livestock can not only hamper a farmer’s ability to do his job but can cause significant upset, inconvenience and loss of income. We understand this, and we want to disrupt those who would target the rural community while helping farmers to safeguard their properties and themselves.”

Johnston Gilpin’s managing director Randal McConnell said: “John Deere is now fitting Datatag’s CESAR security marking system as standard on all XUV and HPX Gator utility vehicle models sold in the UK & Ireland, as a way of protecting against theft, recovering stolen equipment and reducing insurance premiums. We are very happy to support the PSNI in this way to help their efforts to prevent crime in the countryside.”

The PSNI and Copagator display can also be seen at the following regional events in Northern Ireland this summer: