Chairman of the Board of Directors
Deere & Company 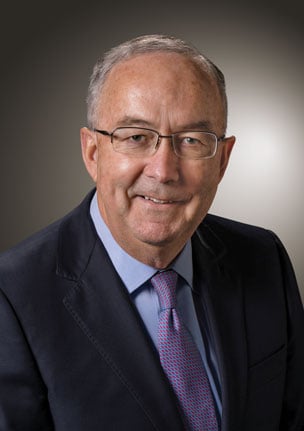 Samuel R. Allen is Chairman of the Board of Directors of Deere & Company, a position he has held since February 2010. He previously had the additional role of Chief Executive Officer, a role held until November 2019. In earlier roles, he was named President and Chief Executive Officer in August 2009 and appointed President and Chief Operating Officer and a member of the board of directors in June of that year.

Previously, Allen was President, Worldwide Construction & Forestry Division, a role that included responsibility for John Deere Power Systems. He also served in Deere's Worldwide Agricultural Division, leading operations in Latin America, China and East Asia, and Australia. Earlier, he was responsible for Deere's intelligent equipment technologies unit and for advanced technology and engineering. He also led human resources, labor relations, and the company's financial-services organization. Allen, who joined Deere in 1975, served as a senior officer from 2001 to 2019.

Deere & Company (NYSE: DE) is a world leader in providing advanced products and services and is committed to the success of customers whose work is linked to the land—those who cultivate, harvest, transform, enrich, and build upon the land to meet the world’s dramatically increasing need for food, fuel, shelter, and infrastructure. Since 1837, John Deere has delivered innovative products of superior quality built on a tradition of integrity. For more information, visit John Deere at its worldwide website at www.JohnDeere.com.