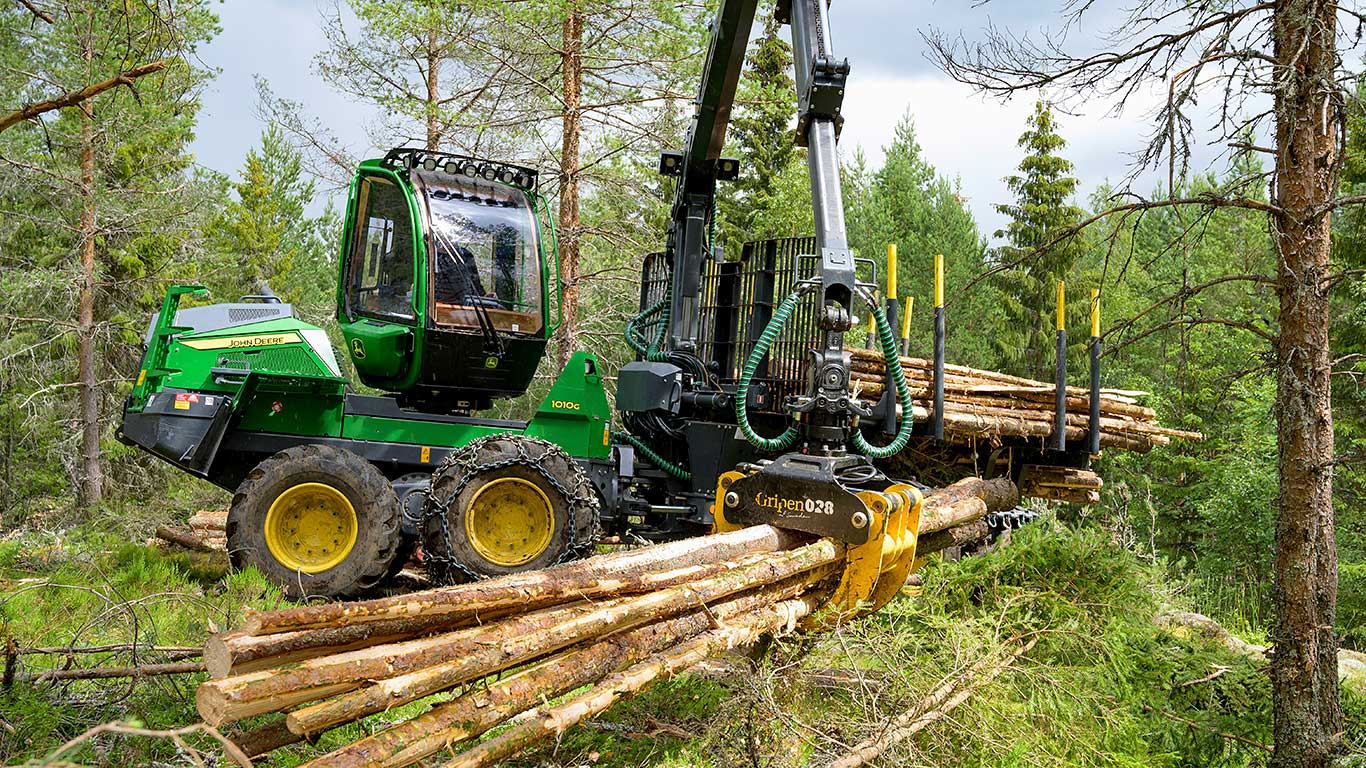 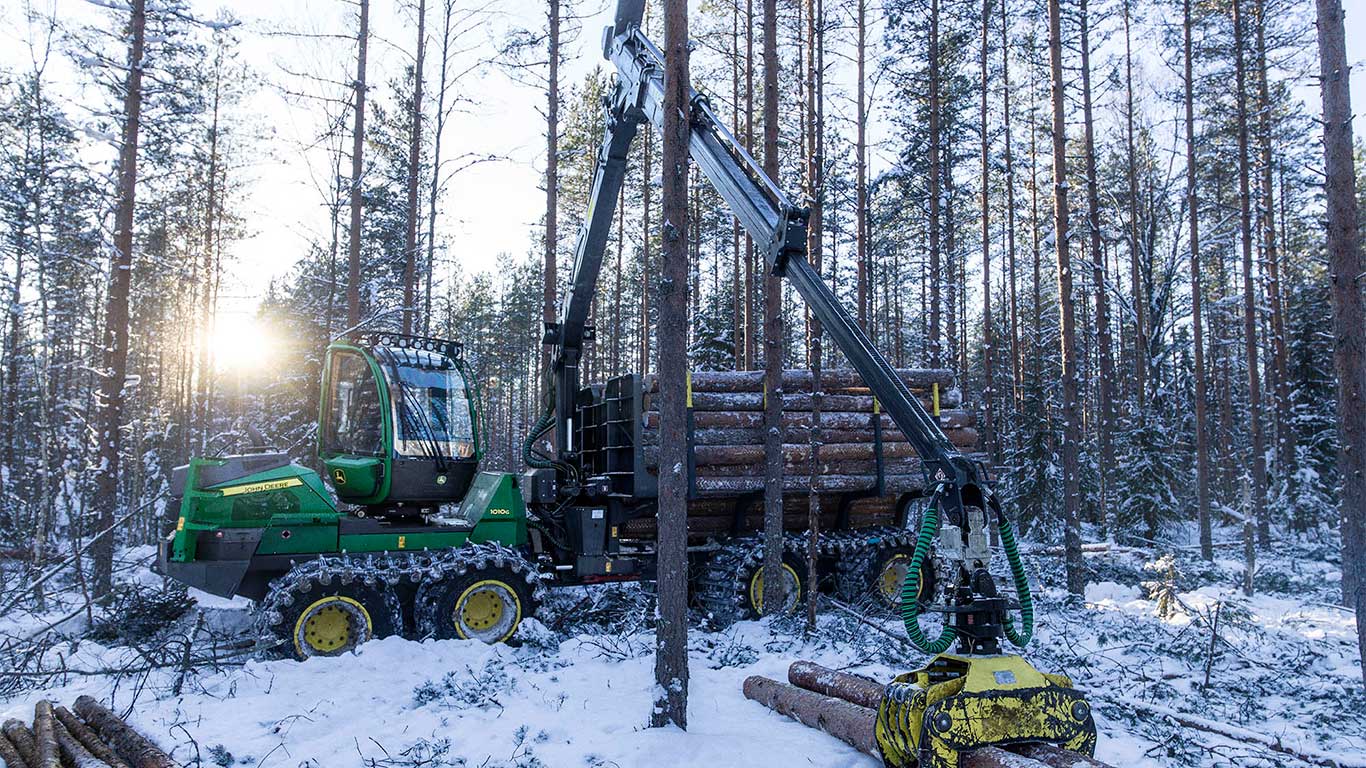 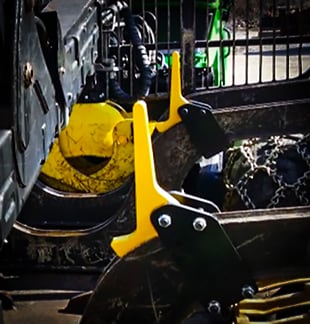 Sorters make it easy to sort the timber in the forwarder’s load area. Sorters are easy to use. The tiltable sorters can be quickly tilted with the grapple. The sorters stand about 20 cm high when vertical and about 10 cm when tilted.

With TimberMatic Maps, the different assortments can be highlighted with different colors by marking them as favourites. This together with the sorters, helps to separate the assortments and to build the load already sorted which speeds up the unloading considerably. 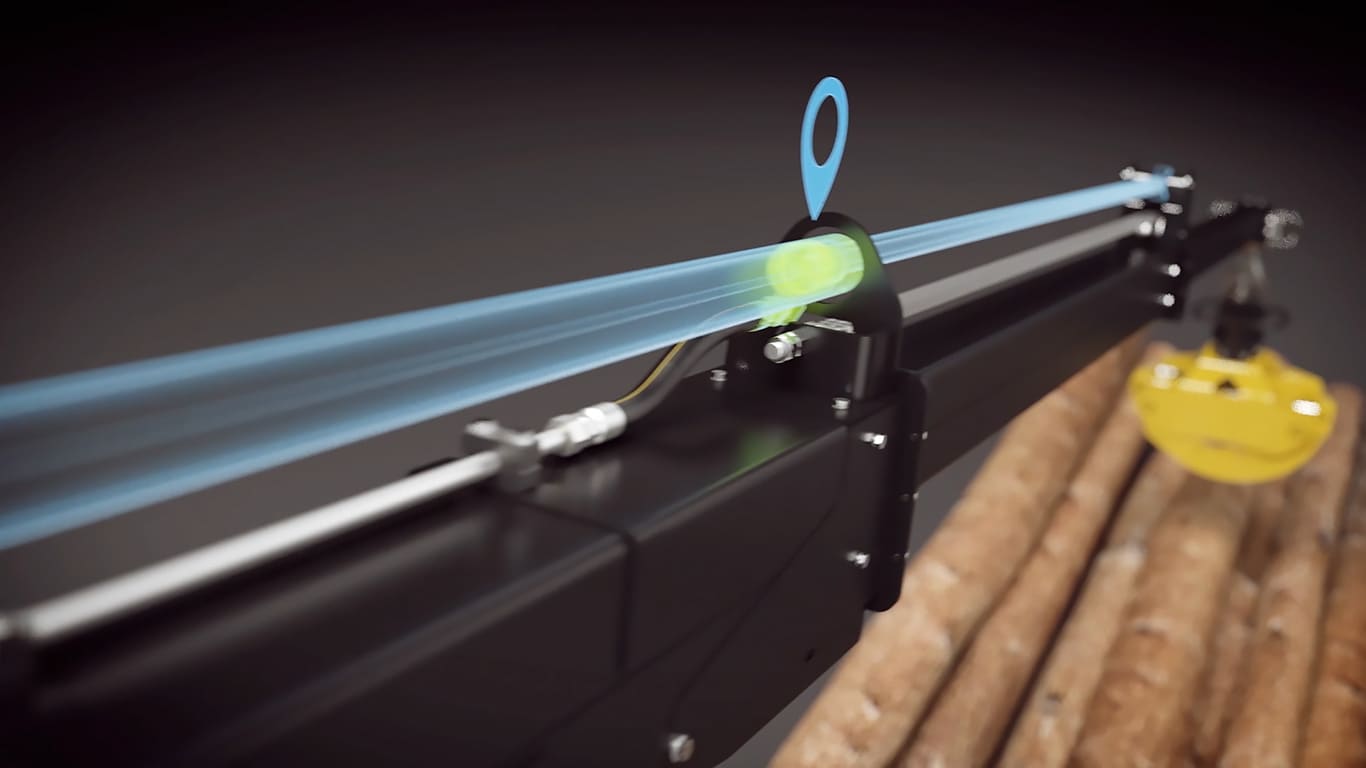 The data between the machines are updated through a cloud service, and all the operators working at the same work site can see all the tree species and assortments with the driving routes right down to the individual logs.

Rotating and levelling or fixed cabin 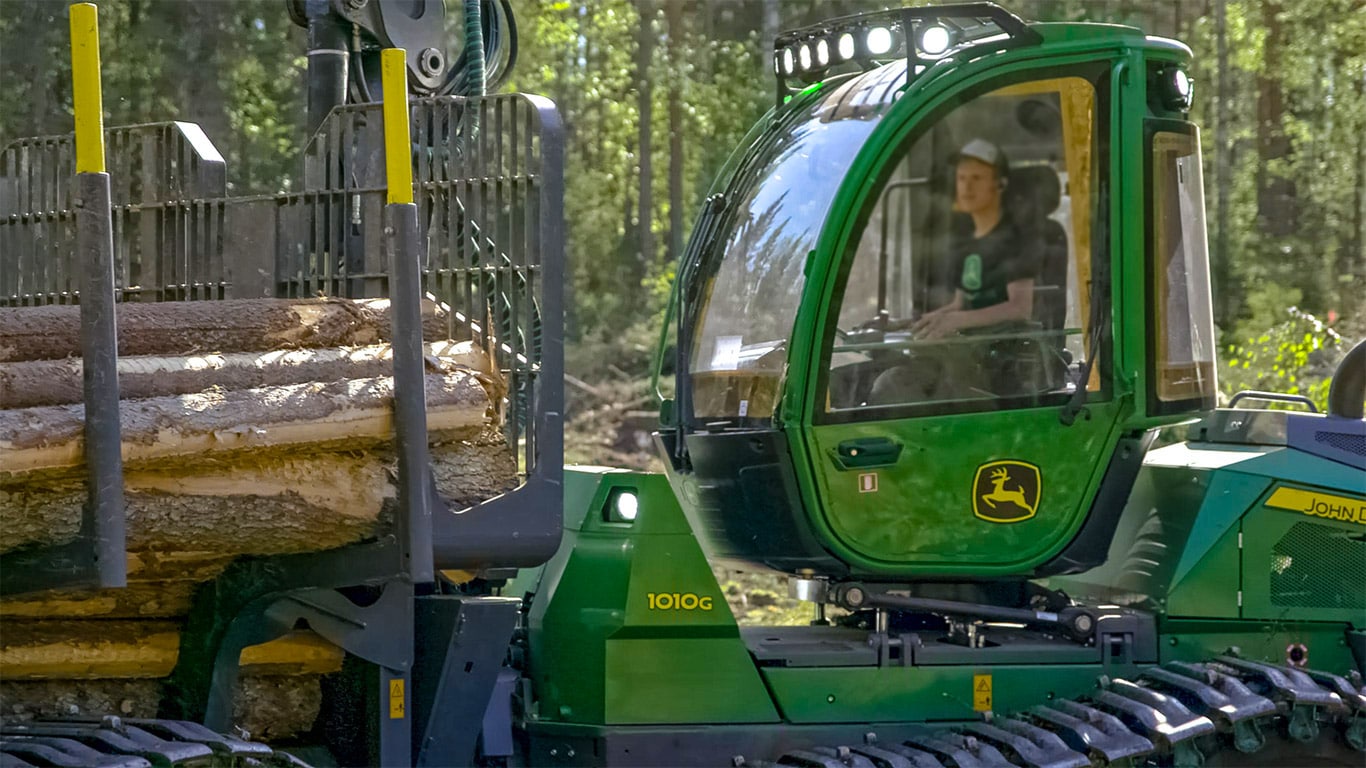 Cabin comfort is a productivity factor. The cabin of a John Deere forest machine is a comfortable and ergonomic work environment. The cabin is available as fixed or rotating and levelling version.

The levelling and rotating cabin helps the operator to maintain the correct working posture to prevent stress on the back and shoulder areas. The operator can sit upright even on uneven terrain, and the cabin can be rotated in all directions to face the work area. The cabin has more legroom in front and the seat has two different height settings. The proven and efficient vibration absorption improves the working conditions further. Leveling and rotating functions are an option in harvesters. The cabin is fixed if these options are not chosen.

The precision and power of the G-Series forwarders’ boom control is unprecedented. New controllers, simplified CAN busses and streamlined electrical systems bring more power, speed and precision control to the boom. The updates decrease malfunction sensitivity and accelerate troubleshooting. The number of fuses has been reduced thanks to controllers that recognize overcurrent situations and cut the feed when necessary to protect the equipment.

IBC is available as an option for CF5 boom. The boom becomes more accurate and easy to operate: the operator controls the boom tip directly instead of controlling independent boom joint movements. The system also considerably reduces the number of tuning parameters needed and increases durability of boom structures and hydraulic cylinders.

The system has predefined limit values and it adjusts boom operations within these limits according to need. IBC system also has a separate, preprogrammed option for unloading, where the strong jib and main boom movements are used more.

In the latest 2.0 version of intelligent boom control, the precision of the grapple control has been improved, especially in long reaches. The software uses information about the grapple position, and the speed of the rotation in long reaches matches that of short reaches.

The IBC system also features electrical end damping for all the main boom movement directions. The system dampens the cylinder end movements softly and stops strong blow-like loads in the end positions which makes driving smoother and also improves the durability of the boom.

Operators can adjust the overall speed of the IBC system according to their needs. They can also adjust the speed between various boom parts or change it by using the extension boom manually during operation. The system is switched on and off with the press of a button.

Adaptive driveline control is a unique standard feature in G-Series mid-size forwarders forest machines. This control system improves the machines’ drivability and productivity. The operator selects the desired driving mode (Eco, Normal, Power) for the operating conditions, and the system automatically adjusts the engine’s RPMs to correspond with the engine load and keeps the driving speed steady also during high loads. The driveline control ensures that the diesel engine runs smoothly and uses the available maximum tractive force efficiently during high-load situations. Also the response of the drive pedal and frame steering have been improved with smart electronic filtering.

There are no holes, brackets or other accessories at the front of the jib boom which would weaken the boom or would be prone to impact damage. Hoses and cables are covered by the boom structure and the hose routing between the main and jib boom and inside the extension pack have been redesigned.

With its 11-ton load capacity, light rear frame, big approach angle and powerful FT4 engine combined with the optional 26.5” tires, long rear bogie and IBC, the 1010G is a very versatile forwarder for thinning. Driving over ditches is very smooth, servicing is easy, and the engine is Stage V-ready.

The 1010G forwarder has been designed by Designworks, a BMW Group company. Special attention has been paid to ease of service: a large panel on the right side of the engine hood can be opened and the upper part can be tilted forward. The fuel tank has been moved to the front and a hydraulic module has been added to the freed space behind the cabin. The hydraulic components in this module are easy to reach for servicing.

A long-bogie version of the 1010G forwarder is available for logging on soft terrain. The distance between the front and rear wheel hubs in the rear bogie is 390 mm longer than in the standard model. The power train and turning radius are the same as with the standard portal bogie-equipped machine. The long bogie brings stability when navigating over obstacles. The lower ground pressure of the rear frame makes the machine an excellent choice for logging in soft terrain and enables bigger loads with the same ground pressure. .

The TimberMatic control system and user interface on G-Series forwarders have been further developed and improved to maintain the forest machine’s operational reliability. The TimberMatic features a configurable user interface, cruise control and inclination display. The new software version enables Remote Display Access (RDA) via the Internet (either MTG or other modem). RDA enables faster troubleshooting by servicing people and thus improves the machine’s uptime.

Forwarders have three modules: for the cabin, the front frame and the rear frame. TimberMatic’s troubleshooting diagnostics are more detailed and illustrative. The CAN bus increases reliability of the electrical system: simple, fewer connections, a dedicated bus for the engine and the base machine.

TimberMatic Maps is standard in all new John Deere forest machines. Based on the real time data from Maps to TimberManager, distributed through a cloud service, the contractor can follow up forest machine’s production and remaining work on the site and plan the operations further.

Especially the low rpm ranges have much torque. The John Deere FT4 engine has the most torque in its class and a wide rpm range. The engine’s rpm remain steady during big and rapid changes in the load. The better coupling of the powerful diesel engine with the power train results in improved tractive force and excellent manoeuvrability in the forest. The FT4 engine and the entire fuel line can use 20% biodiesel.

Efficient John Deere 1010G forwarder with 11 ton load capacity is the choice for all terrain conditions. Available with the unique Intelligent Boom Control.

John Deere 1010G forwarder is working in a forest.

Efficient John Deere 1010G forwarder with 11 ton load capacity is the choice for all terrain conditions. Customer telling about his experiences.

John Deere 1010G forwarder is working in a forest.