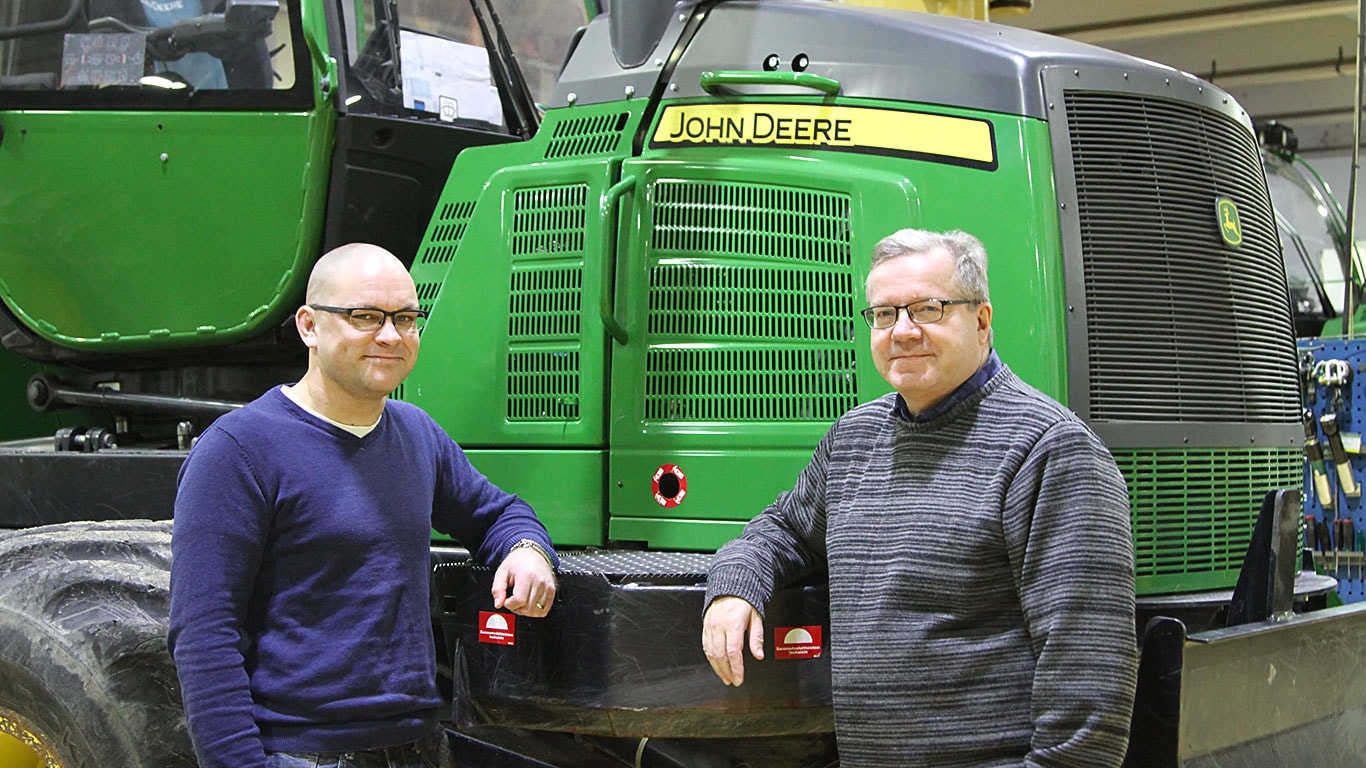 Teemu Hautamäki (on the left) and Pekka Karjalainen

John Deere has one clear advantage over other forest machine manufacturers: its own engine factory. Close collaboration provides excellent opportunities to optimize the engine specifically for forest machines. The requirements for a forest machine engine are taken into consideration already in the design phase, and there is no need for compromises with respect to performance.

JDPS (John Deere Power Systems) manufactures engines for more than 700 equipment manufacturers around the world producing earthmoving, maritime, agricultural and  forest machines, compressors, generators, irrigation pumps and natural gas-powered vehicles. John Deere has designed and produced more than 5 million diesel engines since 1949. Forest machines set the highest requirements on engine performance. The load changes in a forest machine are very fast and the engine must function seamlessly with numerous other systems and components, such as the power train, the boom and the harvester head.

Collaboration between John Deere Forestry and Power Systems starts with specification of the engine requirements – for example, the best possible performance and fuel economy at all RPM ranges.
"The requirements of a forest machine are very challenging. Our calibration engineers have to find the best fuel economy without compromising transient response. Thanks to our cooperation we have a better understanding of how the machines are running. Based on this knowledge, we developed a calibration strategy that is unique to forest machines and is applied to all John Deere Forestry engine platforms today – from 4.5 to 9 liter engines. Beyond this, we improved our testing methods for transient response, something we are leveraging now for other calibrations as well," explains Stefanie Dieringer, JDPS, Performance and Calibration team.

From the design table to testing

The development of a new engine is a process that often takes several years. Setting the targets is followed by the design phase, and then by meticulous and long-term testing of the components and systems. For example, development of the Stage IIIb/Interim Tier 4 engines was started with the first concept machines already back in 2008, when the target for the launch of serial production was set for 2013.

Engine prototypes are scheduled according to the project timetable for  new machine models, and John Deere Forestry continues the testing for its part both in the laboratory as well as in actual field conditions. For standardized test conditions, John Deere has two thermodynamic test facilities, the temperature of which can be kept stable by removing the heat produced by the engine. The test facilities, located in Tampere, make it possible to perform comprehensive testing to ensure that the performance requirements set for the engine in the initial phase of the project are achieved. The final testing is done in the forest.

Teemu Hautamäki has headed the engine testing team for five years. Pekka Karjalainen, Chief Design Engineer, is responsible for conveying the goals set for the engine by John Deere Forestry to the engine factory’s product development unit. "There is a continuous flow of information between the engine factory and forest machine product development. This collaboration makes it possible to identify problems and malfunctions well in advance of the product launch. JDPS’s performance and fuel consumption tests provide good input data already in the initial phase of the engine project. And when needed, engine control is fine-tuned and tested together, ultimately resulting in a functional package in which all the systems work well together," Teemu Hautamäki sums up.

The torque of John Deere’s Stage IV/FT4 engines remains good even at low RPM, the engine’s noise level is low, and performance has been increased while fuel consumption has decreased – in big harvester models, e.g., by as much as 10 percent compared to Stage IIIb/IT4. Meeting Stage IV/FT4 emissions requirements requires the adoption of Selective Catalytic Reduction (SCR) and a urea system, in addition to the Diesel Oxidation Catalyst (DOC) and Diesel Particulate Filter (DPF) previously in use. All the required components have been placed inside the machine’s structures, so they don’t inhibit visibility and impede the work performance. However, sights are already being set to the future. The next, Stage V, emissions level for 130 kW-560kW engines will come into force in 2019. John Deere customers can sleep easy knowing that the technology to meet also the future requirements already exists at Deere’s engine factory.

The first regulations for new nonroad diesel engines over 37 kW (50 hp) began in 1996 when John Deere launched PowerTech™, a new breed of engines that met Tier 1/Stage I emissions regulations. Since then, several tiers and stages have been developed to meet tightened regulations. 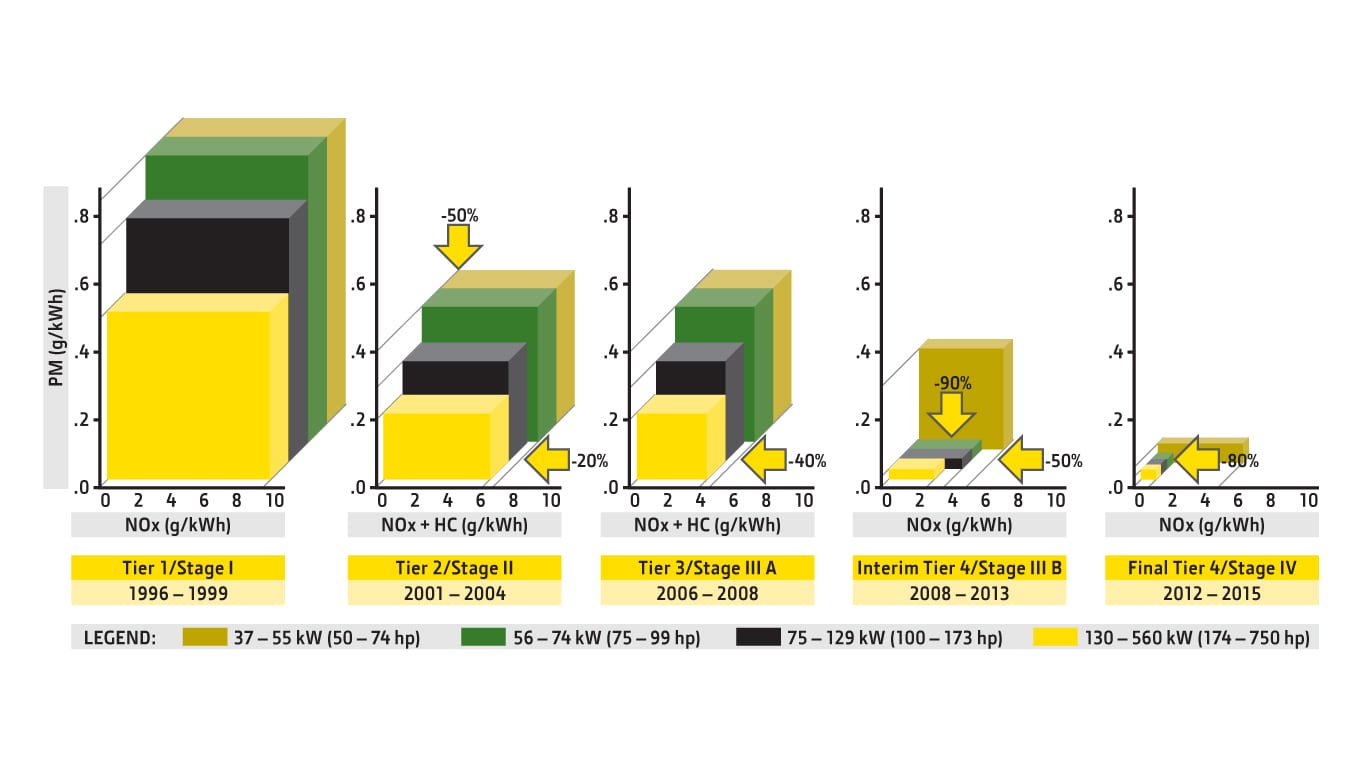